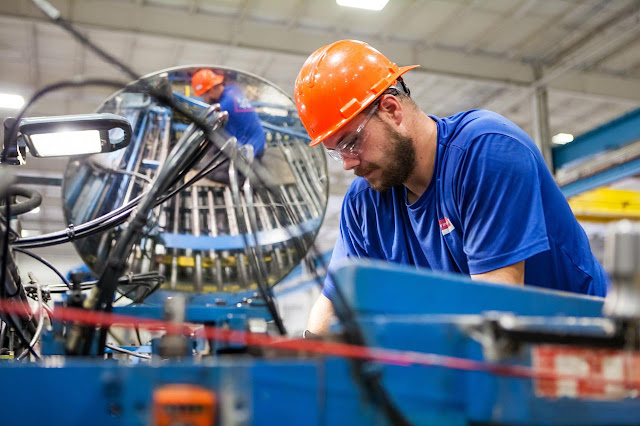 A processing operation uses energy to alter a workpart’s shape, physical properties, or appearance to add value to the material. The forms of energy include mechanical, thermal, electrical, and chemical. The energy is applied in a controlled way by means of machinery and tooling.
Human energy may also be required, but the human workers are generally employed to control themachines, oversee the operations, and load and unload parts before and after each cycle of operation. A general model of a processing operation is illustrated in Figure 1.1(a).
Materialis fedinto the process, energyis applied by themachinery and tooling to transform the material, and the completed workpart exits the process.
Most production operations produce waste or scrap, either as a natural aspect of the process (e.g., removing material, as in machining) or in the form of occasional defective pieces. It is an important objective in manufacturing to reduce waste in either of these forms.
More than one processing operation is usually required to transform the starting material into final form. The operations are performed in the particular sequence required to achieve the geometry and condition defined by the design specification.
Threecategories of processing operations are distinguished: (1) shaping operations, (2) property-enhancing operations, and (3) surface processing operations.Shaping operations alter the geometry of the starting work material by various methods.
Common shaping processes include casting, forging, and machining. Property-enhancing operations add value to the material by improving its physical properties without changing its shape. Heat treatment is the most common example. 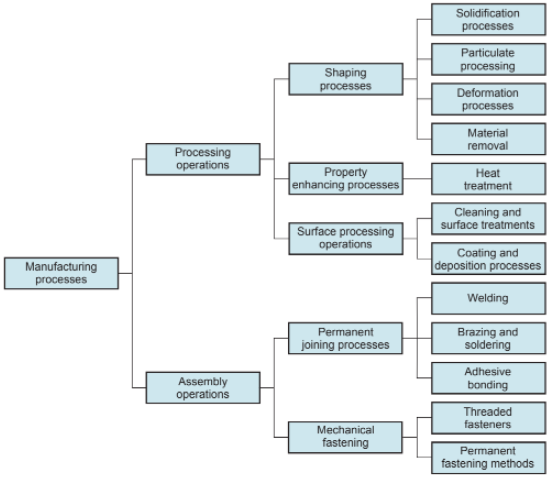 Most shape processing operations apply heat, mechanical force, or a combination of these to effect a change in geometry of the work material.
There are various ways to classify the shaping processes. The classification used in this book is based
on the state of the starting material, by which we have four categories:
In the first category, the starting material is heated sufficiently to transform it into a liquid or highly plastic (semifluid) state. Nearly all materials can be processed in this way. Metals, ceramic glasses, and plastics can all be heated to sufficiently high temperatures to convert them into liquids.
With the material in a liquid or semifluid form,it can be poured or otherwise forced to flow into a mold cavity and allowed to solidify, thus taking a solid shape that is the same as the cavity. Most processes that operate this way are called casting or molding.
Casting is the name used for metals, and molding is the common term used for plastics. This category of shaping process is depicted in Figure 1.5. In particulate processing, the starting materials are powders of metals or ceramics.
Although these two materials are quite different, the processes to shape them in particulate processing are quite similar. The common technique involves pressing and sintering, illustrated in Figure 1.6, in which the powders are first squeezed into a die cavity under high pressure and then heated to bond the individual particles together.
In deformation processes, the starting workpart is shaped by the application of forces that exceed the yield strength of the material. For the material to be formed in this way, it must be sufficiently ductile to avoid fracture during deformation.
To increase ductility (and for other reasons), the work material is often heated before forming to a temperature below the melting point. Material removalprocessesareoperations that remove excess material from the starting workpiece so that the resulting shapeis the desired geometry.
Themostimportant processesin this category are machining operations such as turning, drilling, and milling. These cutting operations are most commonly applied to solid metals, performed using cutting tools that are harder and stronger than the work metal.
Grinding is another common process in this category. Other material removal processes are known as non-traditional processes because they use lasers, electron beams, chemical erosion, electric discharges, and electrochemical energy to remove material rather than cutting or grinding tools.
It is desirable to minimize waste and scrap in converting a starting workpart into its subsequent geometry.

Certain shaping processes are more efficient than others in terms of material conservation. Material removal processes (e.g., machining) tend to be wasteful of material, simply by the way they work. Thematerial removed from the starting shapeis waste, at least in terms of the unit operation.
Other processes, such as certain casting and molding operations, often convert close to 100% of the starting material into final product. Manufacturing processes that transform nearly all of the starting material into product and require no subsequent machining to achieve final part geometry are called net shape processes.
Other processes require minimum machining toproduce the final shape and arecallednearnet shape processes.

The second major type of part processing is performed to improve mechanical or physical properties of the work material. These processes do not alter the shape of the part, except unintentionally in some cases.
The most important property-enhancing processes involve heat treatments, which include various annealing and strengthening processes for metals and glasses. Sintering of powdered metals and
ceramics is also a heat treatment that strengthens a pressed powder metal workpart.

The second basic type of manufacturing operation is assembly, in which two or more separate parts are joined to form a new entity. Components of the new entity are connected either permanently or semipermanently.
Permanent joining processes include welding, brazing, soldering, and adhesive bonding.They form a joint between components that cannot be easily disconnected. Certain mechanical assembly methods are available to fasten two (or more) parts together in a joint that can be conveniently disassembled.
The use of screws, bolts, and otherthreaded fasteners are important traditional methods in this category. Other mechanical assembly techniques form amorepermanentconnection; these include rivets, press fitting, and expansion fits.
Special joining and fastening methods are used in the assembly of electronic products.Someof themethods areidentical toorareadaptationsof theprecedingprocesses, for example, soldering. Electronics assembly is concerned primarily with the assembly of components such as integrated circuit packages to printed circuit boards to produce the complex circuits used in so many of today’s products.
Joining and assembly processes are discussed in Part VIII, and the specialized assembly techniques for electronics are described in Part IX.

Manufacturing operations are accomplished using machinery and tooling (and people). The extensive use of machinery in manufacturing began with the Industrial Revolution. It was at that time that metal cutting machines started to be developed and widely used.
These were called machine toolspower riven machines used to operate cutting tools previously operated by hand. Modern machine tools are described by the same basic definition, except that the power is electrical rather than water or steam, and the level of precision and automation is much greater today.
Machine tools are among the most versatile of all production machines. They are used to make not only parts for consumer products, but also components for other production machines. Both in a historic and a reproductive sense, the machine tool is the mother of all machinery.
Other production machines include presses for stamping operations, forge hammers for forging,rolling millsfor rolling sheet metal, welding machinesfor welding, and insertion machines for inserting electronic components into printed circuit boards.
The name of the equipment usually follows from the name of the process. Production equipment can be general purpose or special purpose. General purpose equipment is more flexible and adaptable to a variety of jobs. It is commercially available for any manufacturing company to invest in.
Special purpose equipment is usually designed to produce a specific part or product in very large quantities. The economics of mass production justify large investments in special purpose machinery to achieve high efficiencies and short cycle times.
This is not the only reason for special purpose equipment, but it is the dominant one. Another reason may be because the process is unique and commercial equipment is not available. Some companies with unique processing requirements develop their own special purpose equipment.
Production machinery usually requires tooling that customizes the equipment for the particular part or product. In many cases, the tooling must be designed specifically for the part or product configuration. When used with general purpose equipment, it is designed to be exchanged.
For each workpart type, the tooling is fastened to the machine and the production run is made. When the run is completed, the tooling is changed for the next workpart type. When used with special purpose machines, the tooling is often designed as an integral part of themachine.
Because the specialpurposemachineislikelybeingused formassproduction, the tooling may never need changing except for replacement of worn components or for repair of worn surfaces. The type of tooling depends on the type of manufacturing process.
Location: Indonesia