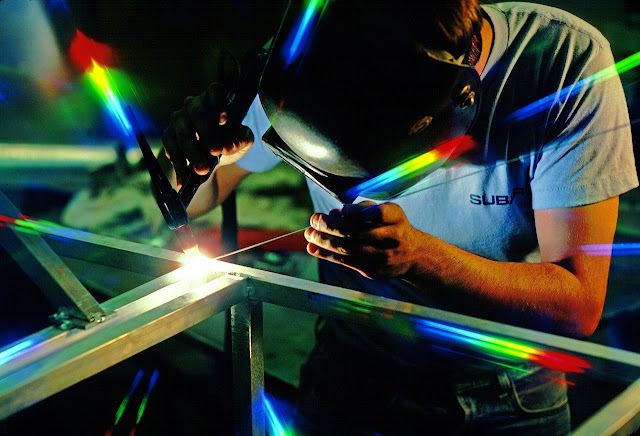 Most engineering materials can be classified into one of three basic categories:(1) metals, (2) ceramics, and (3) polymers. Their chemistries are different, their mechanical and physical properties are different, and these differences affect the manufacturing processes that can be used to produce products from them.
In addition to the three basic categories, there are (4) composites—nonhomogeneous mixtures of the other three basic types rather than a unique category. The classification of the four groups is pictured in Figure 1.3. This section surveys these materials. Chapters 6 through 9 cover the four material types in more detail.

Metals used in manufacturing are usually alloys, which are composed of two or more elements, with at least one being a metallic element. Metals and alloys can be divided into two basic groups: (1) ferrous and (2) nonferrous.

Ferrous metals are based on iron; the group includes steel and cast iron. These metals constitute the most important group commercially, more than three fourths of the metal tonnage throughout the world. Pure iron has limited commercial use, but when alloyed with carbon, iron has more uses and greater commercial value than any other metal.
Alloys of iron and carbon form steel and cast iron. Steel can be defined as an iron–carbon alloy containing 0.02% to 2.11% carbon. Itis the most important category within the ferrous metal group. Its composition often includes other alloying elements aswell, such asmanganese, chromium, nickel, andmolybdenum, to enhance the properties of the metal.
Applications of steel include construction (bridges, I-beams, and nails), transportation (trucks, rails, and rolling stock for railroads), and consumer products (automobiles and appliances). Cast iron is an alloy of iron and carbon (2% to 4%) used in casting (primarily sand casting).
Silicon is also present in the alloy (in amounts from 0.5% to 3%), and other elements are often added also, to obtain desirable properties in the cast part. Cast iron is available in several different forms, of which gray cast iron is the most common; its applications include blocks and heads for internal combustion engines.

A ceramic is defined as a compound containing metallic (or semimetallic) and nonmetallic elements. Typical nonmetallic elements are oxygen, nitrogen, and carbon. Ceramics include a variety of traditional and modern materials.
Traditional ceramics, some of which have been used for thousands of years, include: clay (abundantly available, consisting of fine particles of hydrous aluminum silicates and other minerals used in making brick, tile, and pottery);silica (the basis for nearly all glass products); and alumina and silicon carbide (two abrasive materials usedin grinding).
Modern ceramicsinclude some of the precedingmaterials, such as alumina,whose properties are enhancedin variousways throughmodern processingmethods.
Newer ceramics include: carbides metal carbides such as tungsten carbide and titanium carbide, which are widely used as cutting tool materials; and nitrides metal and semimetal nitrides such as titanium nitride and boron nitride, used as cutting tools and grinding abrasives.
For processing purposes, ceramics can be divided into crystalline ceramics and glasses. Different methods of manufacturing are required for the two types. Crystalline ceramics are formed in various ways from powders and then fired (heated to a temperature below the melting point to achieve bonding between the powders).
The glass ceramics (namely, glass) can be melted and cast, and then formed in processes such as traditional glass blowing.

A polymer is a compound formed of repeating structural units called mers, whose atoms share electrons to form very large molecules. Polymers usually consist of carbon plus one or more other elements, such as hydrogen, nitrogen, oxygen, and chlorine. Polymers are divided into three categories:
Thermoplasticpolymerscanbe subjected tomultipleheatingandcoolingcycleswithout substantially altering themolecular structure of the polymer.Common thermoplasticsinclude polyethylene, polystyrene, polyvinylchloride, and nylon.
Thermosetting polymers chemically transform (cure) into a rigid structure on cooling from a heated plastic condition; hence the name thermosetting. Members of this type include phenolics, amino resins, and epoxies.
Although the name thermosetting is used, some of these polymers cure by mechanisms other than heating. Elastomers are polymers that exhibit significant elastic behavior; hence the name elastomer. They include natural rubber, neoprene, silicone, and polyurethane.

Composites do not really constitute a separate category of materials; they are mixtures of the other three types. A composite is a material consisting of two or more phases that are processed separately and then bonded together to achieve properties superior to those of its constituents.
The term phase refers to a homogeneous mass of material, such as an aggregation of grains of identical unit cell structure in a solid metal. The usual structure of a composite consists of particles or fibers of one phase mixed in a second phase, called the matrix.
Composites are found in nature (e.g., wood), and they can be produced synthetically. The synthesized type is of greater interest here, and it includes glass fibers in a polymer matrix, such as fiber-reinforced plastic; polymer fibers of one type in a matrix of a second polymer, such as an epoxy-Kevlar composite; and ceramic in a metal matrix, such as a tungsten carbide in a cobalt binder to form a cemented carbide cutting tool.
Properties of a composite depend on its components, the physical shapes of the components, and the way they are combined to form the final material.
Some composites combine high strength with light weight and are suited to applications such as aircraft components, car bodies, boat hulls, tennis rackets, and fishing rods. Other composites are strong, hard, and capable of maintaining these properties at elevated temperatures, for example, cemented carbide cutting tools.
Lokasi: Indonesia